The College Football Playoff National Championship is an exciting time for many football fans, and this year was no exception. With two of the biggest names in college football competing for the coveted title—combined with a fourth-quarter finale that was filled with suspense and excitement—the 2022 game was one to remember. Ultimately, the Georgia Bulldogs secured a 15-point win over the Alabama Crimson Tide with a final score of 33 to 18.

For this year's playoff, A3 Visual worked with our partners at Infinite Scale to produce and install a variety of print graphics and signage to ensure Lucas Oil Stadium was ready for the big day. Read below for a closer look at some of our top highlights from the installation. 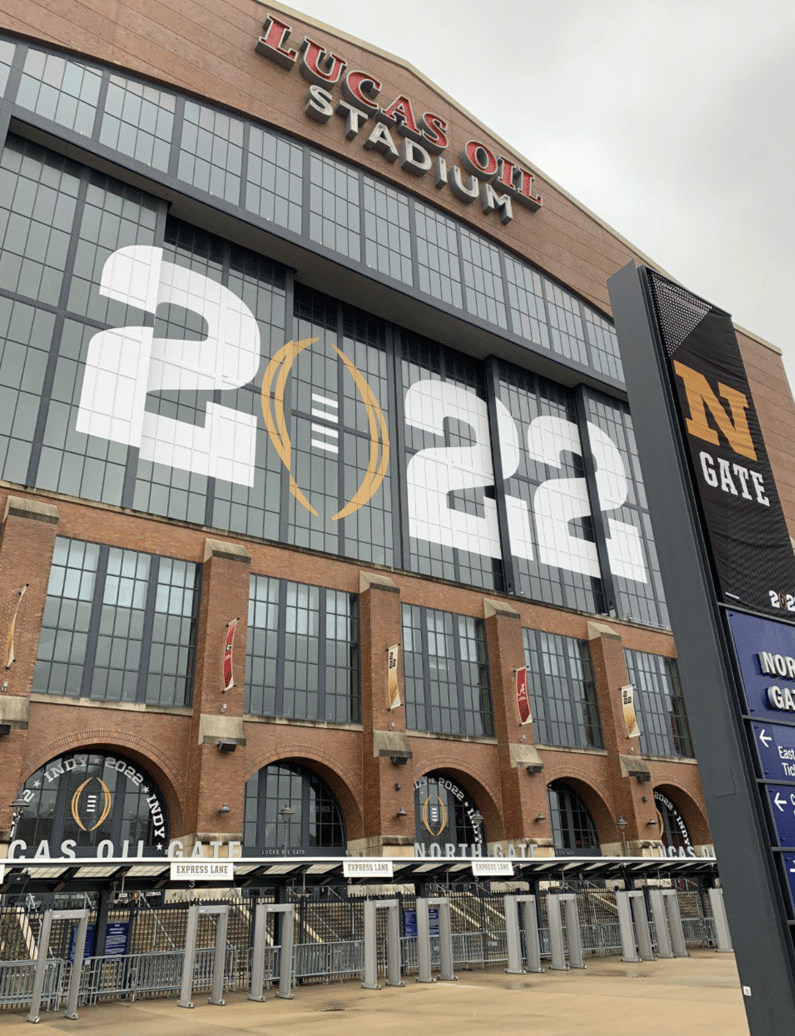 With tens of thousands of fans coming together for the National Championship, Lucas Oil Stadium was covered from floor to ceiling in decals, wraps, banners, and more. Upon arriving at the stadium, guests were greeted by a sprawling entrance window decal featuring the CFP logo and individual team banners. Additional entrances and exits were also wrapped for the occasion and showcased the white, black, and gold branding that has become so synonymous with the championship game. Smaller #GoDawgs and #RollTide graphics were also installed around the perimeter of the venue that celebrated the two teams competing for the title.

Inside the stadium, our team produced a series of sponsorship banners that were placed throughout the main concourse area. These double-sided graphics were installed up above the crowd, making them easily visible no matter how crowded the stadium became—even during halftime.

Looking towards the field, we produced dye-sublimated fabric graphics for the tunnels, stands, and end zones. Especially for key placements—like behind the goalposts—banners needed to be bright and bold for TV viewers, yet low-glare so as not to disrupt the players’ visibility and action on the field. 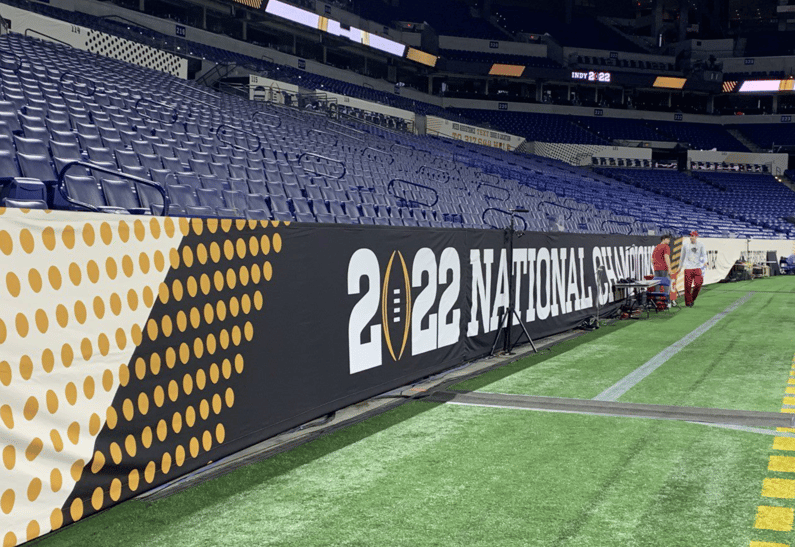 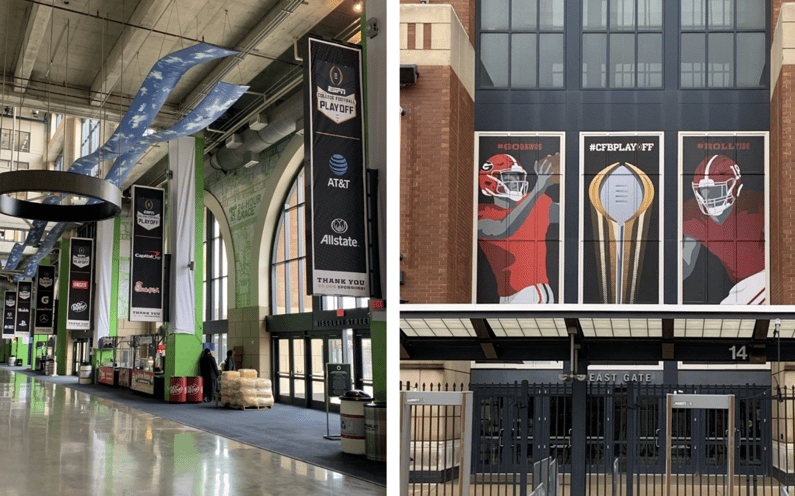 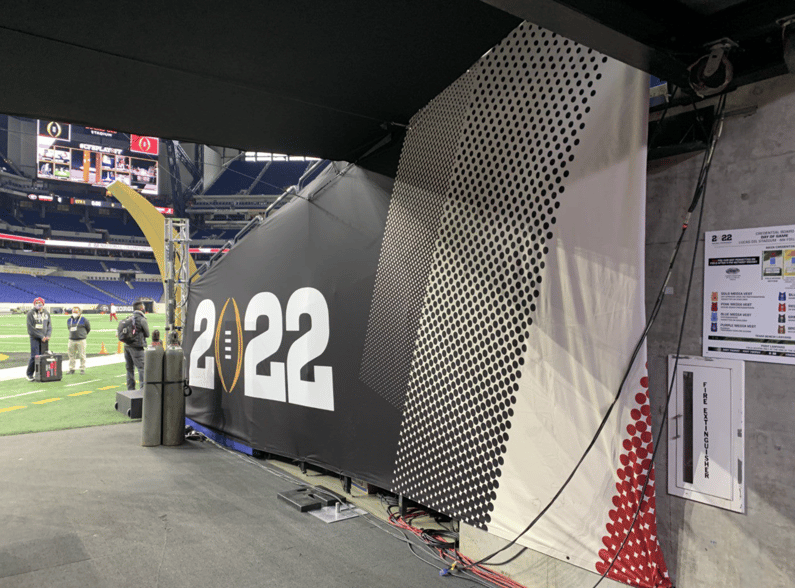 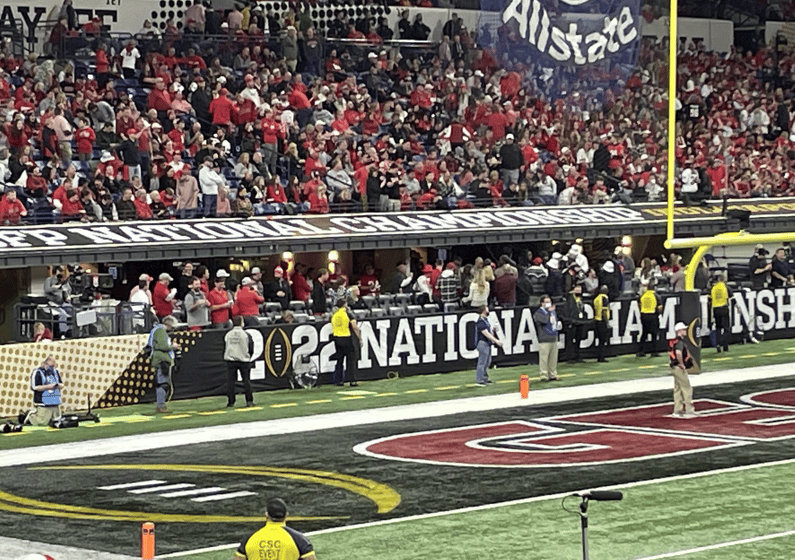 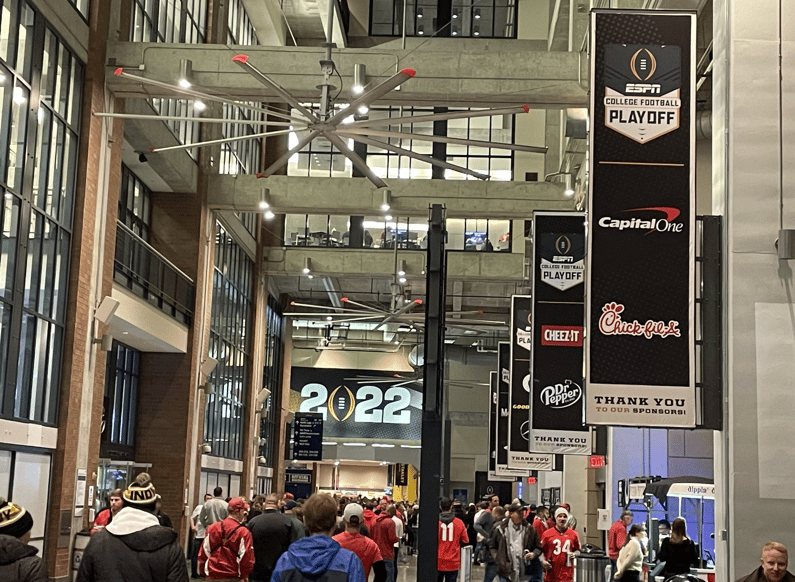 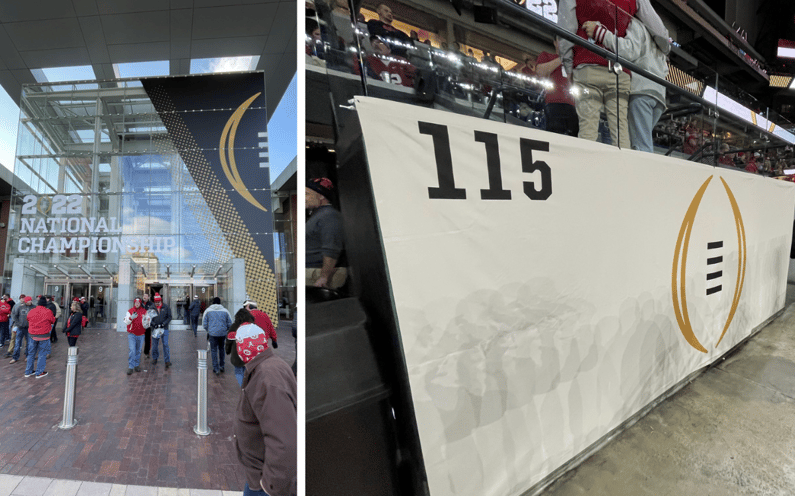 In partnership with Infinite Scale, we produced a variety of graphics to help welcome Georgia and Alabama football fans, athletes, and team members to Indianapolis. From thematic entrance graphics installed behind the front desks to temporary graphics placed throughout the conference halls, meeting corridors, lobby, and lounges, guests of the hotel were immersed in the culture and excitement of college football from the moment they arrived at the hotel.

In total, we helped decorate five of the city’s top hotels and hospitality groups, including the Hyatt Regency, JW Marriott, Marriott Downtown, Westin, and Hilton. Each venue hosted individuals who represented one of the two teams competing for the playoff, including the Georgia band, athletes, and cheerleaders as well as Alabama’s coaches, players, and more. To help support the high-visibility event, the JW Marriott primarily served as the event’s media hub and formal CFP Headquarters. 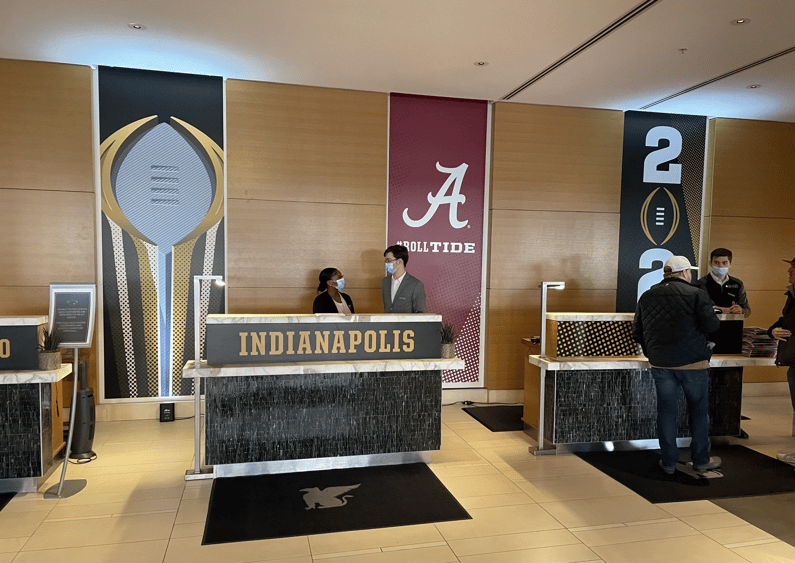 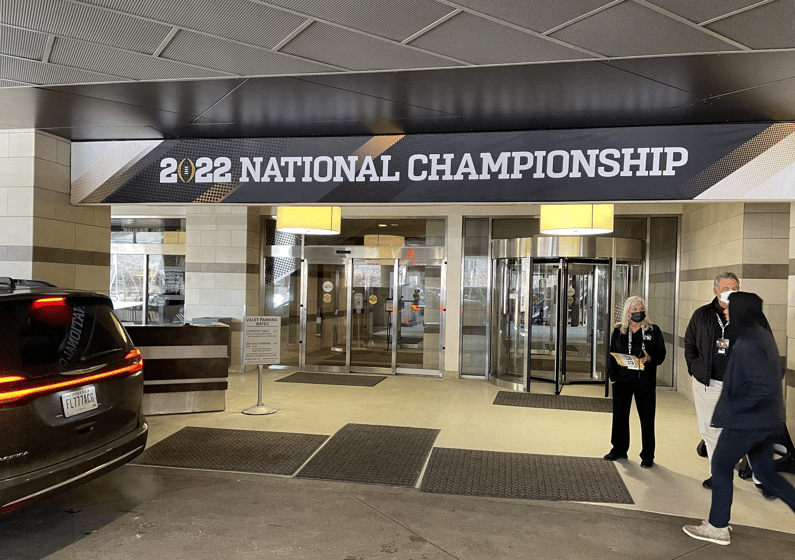 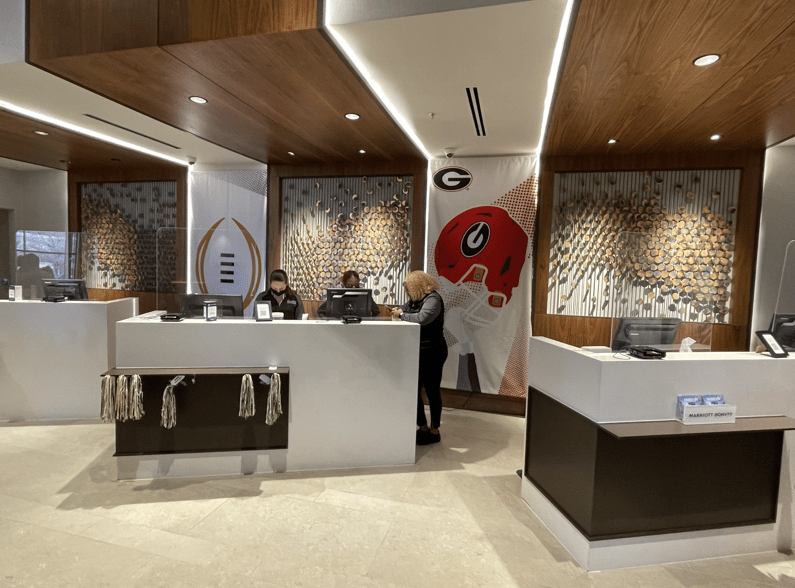 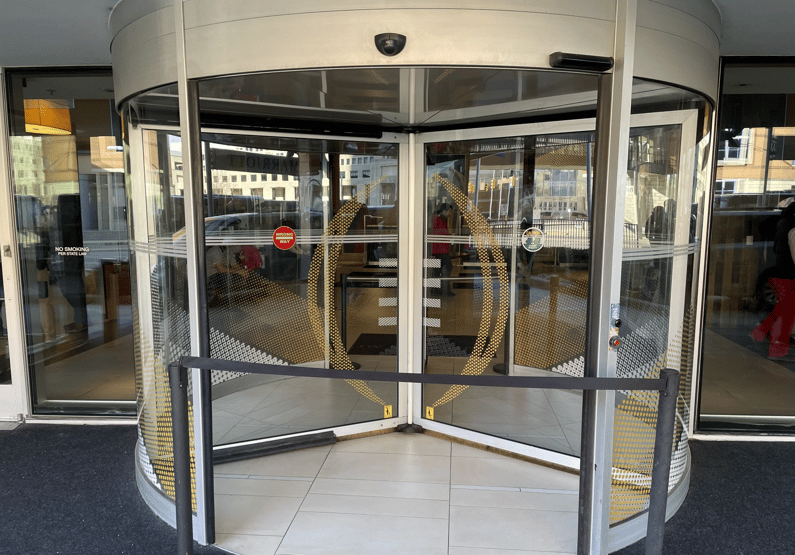 Through the efforts and initiatives of CFP’s Playoff Green program, the organization is focused on minimizing the environmental impact of both the game and its supporting activities. Playoff Green is setting a new standard for sustainability across the college football community, and our team is proud to be supporting that endeavor.

This partnership required A3 Visual to produce a number of eco-friendly recycling bins that were installed both inside and outside the stadium prior to game day. With our team’s focus on sustainability across the large format printing industry, this is an exciting new initiative that furthers our commitment to a more environmentally-friendly future.

"We’re very excited to collaborate with the CFP on their Playoff Green initiative and help support their zero-waste mission,” said Craig Furst, President & CEO for A3 Visual. “In conjunction with our friends at Infinite Scale, we’ve been fortunate to provide graphics and décor for multiple national championship games with a combined interest in developing low-impact, recyclable signage. I’m very proud of the progress we’ve made so far and honored to support Playoff Green.”

An Inside Look at the Rams' Rocket Mortgage Draft House

With the NFL draft taking place this week, teams all across the country have been preparing for what is one of the most ...
Start Reading
A3 Visual August 6, 2021 2 min read

Fall is upon us—and that means college football season is just around the corner.
Start Reading
A3 Visual August 24, 2022 2 min read

College football is back for the 2022-2023 season as the Pac-12 Conference is gearing up for a big year ahead.
Start Reading